The Evolution of My Book Cover

The most frequent comment I get about The Working Dad’s Survival Guide is, “I LOVE the cover.” I love it, too.

Like most things involved with publishing a book, it is a process of creating, editing, trashing, starting over, editing, deciding, tweaking and finally launching something into the world. Creative processes are not easy, and there’s a lot of effort going on behind the scenes.

For today’s post, I want to take a detour from the concerns of working dads, and to share with you the long and winding road of selecting a cover design. (Please note that this artwork is NOT to be used without permission)

I did some research and learned that a book cover should:

Joe Emnace is the graphic designer for Motivational Press, and I think he did a tremendous job. When I was still writing a book, he solicited my ideas about what I wanted the cover to communicate. I also shared a few pictures I liked with Joe, and we began a long productive back-and-forth to arrive at the final cover.

My priority was to communicate the dual challenge faced by working dads- BOTH success at work and at home. As you’ll see below, some cover designs were awesome, but didn’t quite capture this duality. I also wanted a cover that inspired confidence; basically telling the reader, “You can do it, this book can help!” Finally, I didn’t want the book cover to look feminized, gauzy or sentimental. This was a book for men, some of whom may be skeptical about a book on work-family balance. I needed the cover to evoke traditional masculinity while also embracing more modern notions.

Here are some of the initial visuals I sent Joe, based on artwork from articles I’ve been a part of: 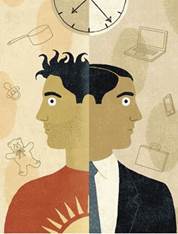 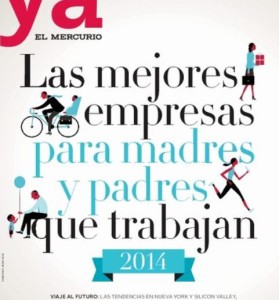 For the first one, I loved the dual nature of the visual (even if the eyes are weird). For the second, I especially liked the visual of the man on the bike commuting to work.

My initial idea was a dad standing, with a baby in one arm and a briefcase in the other, or another visual showing work-family duality. I even mocked up a hilariously bad rendition of my this idea and sent it to Joe:

With this, I stated, “imagine a handsome confident businessman in a suit, with a briefcase in one hand (and maybe a Bluetooth in his right ear) with a baby and perhaps some baby paraphernalia in his other arm.”

Based on my initial thoughts and his expertise, here are the first few designs Joe sent me. while I think they all have merit, they didn’t quite get to what I was looking for. In general, they were still too soft (in color, tone and artwork) and didn’t communicate the business side clearly enough: 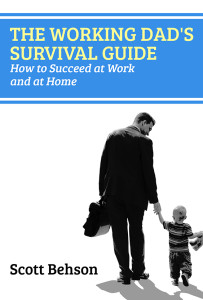 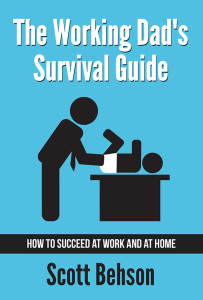 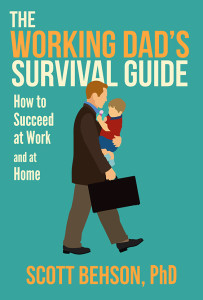 I liked the first, but though it leaned too far to the family side, and while it is a beautiful image, it does not quickly communicate what the book is about. I liked the graphical style on the second book, but didn’t want to evoke images of changing diapers (not very aspirational!). The third was better, but I thought a photo would be better than a drawing, and I wasn’t wild about the color scheme (although it did include my PhD! I didn’t spend 8 years in evil medical school…)

We batted a few more ideas back and forth, and I more strongly pressed for my business guy idea. Joe’s next cover was very close to my initial idea:

I started getting excited at this point, but when I showed it to others, they didn’t like it nearly as much as I did. My friend Brent Almond, who is a dad blogger and graphic designer, was especially helpful in guiding me. He didn’t like this cover, but offered to provide some suggestions. After Joe took Brent’s suggestions into account, we had this, which was VERY NEARLY the final cover.

At this point, I traveled to the Dad 2.0 Summit, and as I was listening to one of the keynote speakers, I saw this visual on the screen behind him:

I didn’t want to use a vacuum cleaner, but I really liked this visual. I immediately snapped a picture and asked Joe to see what he could do with this idea, plus perhaps any more ideas he had, as the deadline to make a decision was approaching fast. here’s what he sent back: 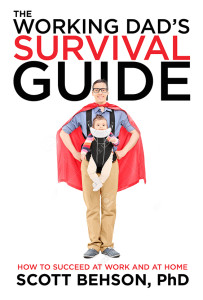 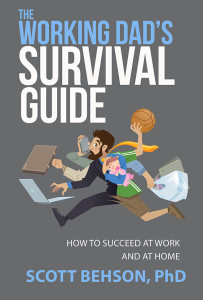 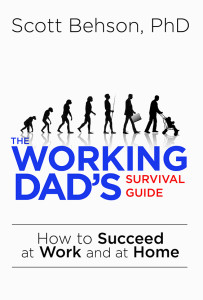 I really liked all three of these. I especially LOVED the first, but just not for this book. If I ever write a straight-up fatherhood book, that’s my cover (I call dibs!). The second one was also solid, but the guy looked more frantic than I wanted- remember, I wanted to project confidence. The third one, based on the evolution theme, I thought, was awesome.

I had another conversation with Brent, and then batted things back and forth with Joe to get to the cover we all know and love. The first image shows a bit of our back and forth. The second is the final version. 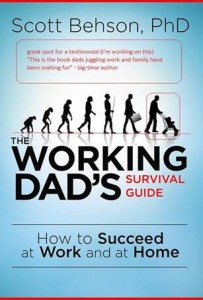 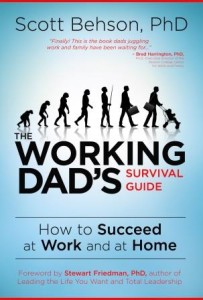 Joe changed the color scheme, gave the last guy a briefcase to go with his stroller, and I was pretty much hooked. His design was visually interesting, communicated the vision of the book, had space for a testimonial and information about the foreword, and would work really well on a computer screen and on twitter.

But I still had the businessman image in my head. So, I posted both covers up on my Fathers, Work and Family Facebook page, as well as the Dad Bloggers Facebook page for input and A/B testing. The response was overwhelming. 95% for evolution!!!

In the end, I couldn’t be happier with the final result!

What do you think about this post, and about the eventual cover design? Did you prefer any of the others? Let’s discuss in the comments section.

A Lesson for Future Working Parents

Ladies, Here’s a Great Father’s Day Gift for your Husband or the Other Dads in Your Life

Buy an Awesome 99-Cent Stocking Stuffer for Dad (or for yourself!)